The original plan was to order parts over the course of the build, not all up front. The idea was simply to spread out the timing of the expenses. In practice, this could have worked out better if we’d realized how long the build would take and had a better idea of the lead times and shipping delays of various items. As it turned out, almost everything was ordered and received long before it was needed.

Here are the results and some comments about each of the sections of the Bill of Materials, each of which covers a different suggested vendor.

Nortd Labs, aka store.lasersaur.com, sells the custom hardware and electronics for the Lasersaur as well as the optics and a few other convenient components. Almost everything in this part of the BOM was ordered from Nortd Labs. The LED strips were sourced on eBay. Rather than buy the Optics Accessory Pack and have it shipped from Europe to the U.S., we picked up a couple pairs of laser safety glasses from Amazon.

The Mouser order was placed as suggested in the BOM with the exception of the two power cables and the cable ties. There are plenty on hand of both, so no need to order more. If needed, standard power cables and zip ties are less expensive from Amazon and probably elsewhere.

Everything required from Misumi to complete build steps 1 through 8 was ordered first, followed later by a second order for the items shown below. Because fasteners can be easily lost, and Misumi offers significant price breaks for bulk purchases, most of the quantities for screws and washers were increased to the next price tier. This didn’t change the overall cost by much.

A special note about the M5 T-slot nuts, which are the single most expensive line item because the BOM calls for 609 of them and they are $0.64 each in this quantity. If you’re looking to save some money on these, make sure you get post-assembly ones with the spring-loaded ball that holds them in place. Also note that the Misumi part already has thread locker applied. Less expensive ones are available (for example, here and here) but without the thread locker. You can pick up some Loctite or similar product and apply it yourself, though. 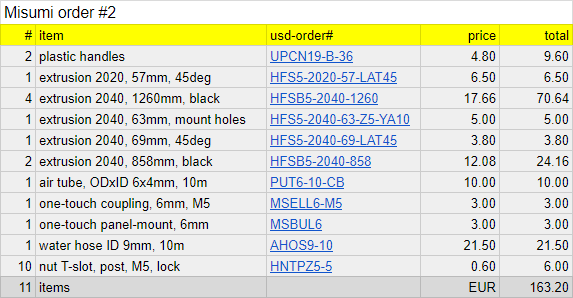 After these two orders, everything from the Misumi section of the BOM was done except for the large sheet products: aluminum, alu-composite, and polycarbonate. Misumi’s actual prices are much higher than the estimates in the BOM, and we were able to find everything locally for less than 30% of Misumi’s price!

The aluminum sheets we got from Metal Supermarkets, cut to size with local pickup.

We also found a local supplier called Polymershapes that carries the alu-composite and polycarbonate in full 4’x8′ sheets that they’d cut. We had the polycarbonate cut into the four pieces needed for the Lasersaur lid. Since the alu-composite it pretty easy to score and break, we just had them cut the sheet in half for easier transport. Here’s how the necessary pieces come from the two half sheets:

Panels cut from one full sheet (click to enlarge)

While waiting for the initial Misumi and Nortd Labs orders to ship, we decided to look into the laser tube, the chiller, and the laser power supply. Our concern was they might take quite a while if they had to ship economically from China. The BOM lists ColeTech as the supplier for these items, but folks on the Lasersaur mailing list have had good results with a few other laser suppliers; chillers and power supplies can be purchased from many vendors.

We chose an  SPT-T100 Enhanced Model T-series 100W Laser Tube from SPT Laser Technology. Sending an inquiry to request a quote was very easy from their website. Communication was excellent and prompt. Payment was made via PayPal and they sent a DHL tracking number the next day.

For the chiller, the BOM specifies the CW-3000. With the possibility of someday using a more powerful laser tube, we opted for the bigger CW-5000, which we found on eBay.

The laser power supply was another eBay purchase. Both the power supplies and the chillers are plentiful.

The two stepper motors were ordered from Oriental Motor using the links in the BOM.

In the U.S., the supplier recommended in the BOM is probably a good choice. With shipping, the required cables would cost about $43 and you know you’d be getting shielded, stranded cable with connectors already attached. Since we already have RJ-45 connectors and the tools to attach them, we looked for bulk cable instead and wound up with 100′ from Monoprice. Given the time, effort, and testing needed to put on the connectors, this will probably not turn out to be worth the savings.

The published BOM does not include everything you’ll need to actually operate the laser safely and conveniently. Here are  other things that should be considered for a complete Lasersaur build.

The BOM does not include a source of pressurized air (or other gas) even though it includes the hoses and fittings. The popular option seems to be this airbrush compressor, which we got from Amazon without sales tax, but which can also be picked up at Harbor Freight.

Some kind of exhaust system is also going to be necessary. It’s unfortunate that no guidance or recommendations are provided. The CAD drawings and parts specifications create a fully-enclosed box, which is definitely not a good idea. As a result, the solutions implemented by builders vary considerably and several builders appear to have greatly underestimated the amount of exhaust airflow that’s really needed. Where to vent the exhaust and whether it needs a robust filtration stage will be different for every user. We haven’t selected an exhaust solution yet, so that will be described in a subsequent post.

Finally, there’s no standard solution for a work table. Aluminum honeycomb is an attractive option, but it can be difficult and costly to obtain, especially for the size of the Lasersaur. Homebrew and jury-rigged solutions are common, and we’ll wind up trying different options once the Lasersaur is running.

In order to more easily calibrate and maintain the machine, it’s helpful to be able to assess the power, both in terms of electric current and laser output. So we added this panel-mount ammeter and this laser power meter to our setup.

The estimates in the BOM for Misumi are low compared to actual current prices in the U.S.. The BOM total, in USD, for Misumi is about $3,560. Actual current prices from Misumi (without shipping) are about $4,085. This puts the realistic cost of the project, using the parts and suppliers from the BOM, near $9,000, including the compressor but not yet including an exhaust system or work table.

However, finding alternate suppliers for key, expensive components, like the laser, power supply, aluminum, alu-composite, and polycarbonate, it’s possible to save a substantial amount, about $2,000 in our case. 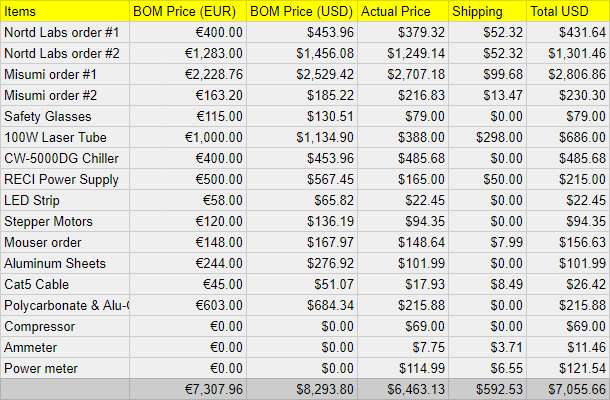