In Part 1 of this article, I described the structure and requirements for making an app, a “Skill”, for the Amazon Echo. Now it’s time to put that into practice and get into the code for a fully-functional Skill.

For this project, I wanted to be able to ask the Echo about new shows on my Kodi media center. Thanks to PVR technology, we’ve completely lost track of the schedule for new TV show episodes. So typical questions around the house include, “do we have anything to watch?” and “do we have a new episode of Modern Family?” Let’s get the Echo to answer those questions!

What Are We Working With?

The whole point is to make the Echo fit into your home automation setup, which is almost certainly different from mine. So here’s a complete outline of the setup that was used for this article. Where your setup differs from mine, you can use the concepts and code here as a starting point to make it work the way you want it to.

One of the files in the GitHub repository is kodi.py, which is a simple wrapper module around parts of the Kodi JSON-RPC API. Find these lines:

and change the address for KODI to be correct for your setup. Once that’s done, you can test that you can use the API from Python. If it doesn’t work, make sure that your Kodi configuration is set to permit control of Kodi via HTTP. We’re going to be using the GetUnwatchedEpisodes method. Try the code snippet below to see the kinds of information it provides.

We’d like to be able to ask the Echo about new episodes of TV shows that are ready to be watched. There are three slightly different types of questions we’d like the Echo to be able to answer

Each of these three question types maps to an Intent. The first two don’t include any TV show names, but the third question form includes the name of any TV show that the user might say. For that Intent, we need to also define a Slot, which is the way that the show name gets passed to our app code.

The file alexa.intents contains the following contents, which describe our Intents in the format required by the ASK:

Next, we need to describe the ways in which a typical user might phrase the questions we support. As described in a previous blog post, these are called Utterances and you can quickly wind up with many, many different ways that people might say them. For our Kodi skill, there are almost 1,300 sample utterances. Fortunately, it’s pretty easy to express all these variations in a few lines and let the computer generate all the permutations.

The file alexa.utterances has the short-hand version of our sample utterances:

When you paste the shorthand utterances into the Amazon Echo Utterance Expander tool, it will give you the output that you need to put into the sample utterances field in the Amazon Developer Console.

As described above, the setup I’m using is Apache with mod_wsgi. So the source code to the web application part of the skill is in echo_handler.wsgi. In this article, I’m not going to go into the details of setting up the Apache configuration except to point out that Amazon will only send requests to your web server using https:// which means you must have SSL configured. Don’t forget that you might need to put your WSGI configuration into ssl.conf and not just into the non-SSL configuration sections. 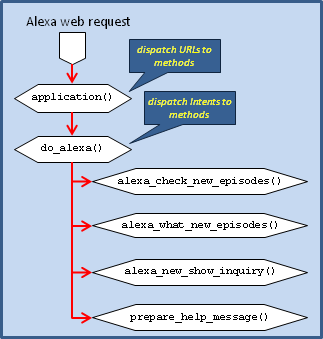 The logic that handles the request and routes it to the appropriate functions for doing the real work is pretty straightforward. First, the request is dispatched to a function associated with the URL. Since the ASK always uses the same URL, there’s only one function (do_alexa) to dispatch to, although it’s configured twice in order to handle www.yoursite.com and www.yoursite.com/ (with and without the trailing /). You can handle additional URLs to do anything you like by adding to the HANDLERS list.

The do_alexa function parses the Alexa request and finds out which Intent is being invoked as well as handling the LaunchRequest when your user says only, “Alexa open <app name>”. Then a secondary dispatch is done to the function that knows how to handle the specified Intent. You can add more Intents in the code by adding to the INTENTS list, and updating your intent schema and sample utterances also, of course.

The code for each of our intents basically starts out the same way. First the kody.py module is used to get information about the unwatched episodes, possibly further reduced to only the recently-added ones. Then the TV show names corresponding to those episodes are collected. This makes it pretty easy to answer each of the questions that the user may ask.

In order to make the interaction with the Echo more interesting and enjoyable, much of the remaining code for each intent is there to build a natural-sounding response for each of several cases. The app even uses a bit of randomness to provide variety in the Echo’s responses.

The last step performed by each intent handler is to take the response that should be spoken by the Echo and pass it to the build_alexa_response() method. This simple utility function packages it up in the format required by the ASK. When the response is returned to the Echo, the Echo answers the user’s question.

Is The Echo A Good Fit For This Kind Of Integration?

Building and using this app has certainly made the Echo more useful. It’s easy to see how similar apps could be built for controlling other types of devices in your home automation setup. But it’s not without its drawbacks.

What do you think? Is it worth it to build custom Alexa skills to add voice control to your home automation? Or is the requirement to have a local web server just too much hassle? Share your thoughts in the comments and let us know how you’re going to use the echo_kodi code for your own projects.