What’s more fun than playing in a room filled with seven hundred balloons? Getting your Wolverine on and popping them with needle sharp claws! 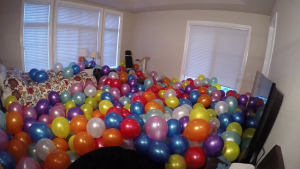 So you’ve gone to the trouble to fill a large area with lots and lots of balloons. Maybe it was for a party or a prank. Or maybe you just ran out of anything better to do. But the party’s over and it’s time to clean up. You need to go from this: 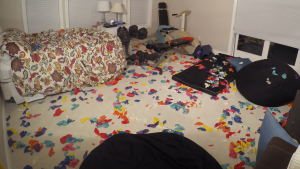 Maybe you’ve seen one of the videos about this “trick.” You can use the oil from an orange peel to pop balloons. That sounds like fun! Let’s see if we can pop all the balloons this way!

OK, so it’s not actually very magic. Orange peels and other foods contain a natural liquid hydrocarbon called limonene, which is a natural solvent of latex and many plastics. It’s used as a component in cleaning products and in some medicines. More recently, it has come to the attention of the maker community because it can be used to dissolve support material in 3D prints. Print your object with ABS and your support structures with High Impact Polystyrene (HIPS) filament. When you’re done, the limonene will dissolve the HIPS much faster than it affects the ABS, letting you print objects that would otherwise be impossible. Of course, you’ll have use a printer that has multiple extruders.

Back to our balloons. Does this really work? 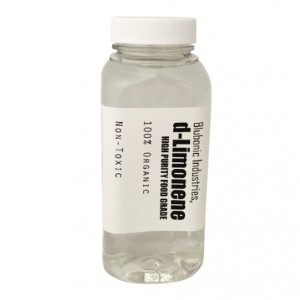 I bought this bottle of limonene figuring that I’d try some with the balloons and then have the rest for future experiments with 3D printing. The recommendations you can find on the web suggest that the limonene should be diluted about 5:1, so this 8 oz. bottle should go a long way.

For some initial experiments, I just put a single drop each onto a few balloons. They did all pop, but with a delay anywhere from 15 seconds to 30 minutes. The difference might be caused by how inflated the balloons were and variations in the latex thickness from balloon to balloon.

When I tried to film a couple outdoors in bright sunlight for slow-motion viewing, I had much less success. There was some wind and the day was hot, so I believe the limonene was evaporating before it could react much with the latex. Nevertheless, it worked well enough indoors that it was worth trying with the big pile of seven hundred.

We put the limonene in some small aerosol spray bottles picked up at Target. These bottles are made of PET plastic, which is important since PET is one of the plastics that does a good job of containing limonene without falling apart.

We sprayed the balloons for more than five minutes, but only got a few pops here and there. The most action was probably three or four balloons in a row, but usually we’d get one pop every 30 seconds or so. I’ve no doubt that more would have kept popping if we just waited half an hour or longer, but it clearly was only going to be a small subset of the balloons, and we weren’t that patient anyway.

Out Come the Claws

Using the limonene was a science experiment, but we knew all along that what we really wanted to do was strap on some sharp claws and attack the inflated demons a la Edward Scissorhands or Wolverine. 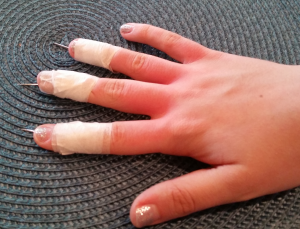 After a couple of attempts to make a wearable glove with some kind of sharp claws, it turned out to be easiest to just attach T-pins to the fingers with a little surgical tape from the first aid kit. This worked like a charm.