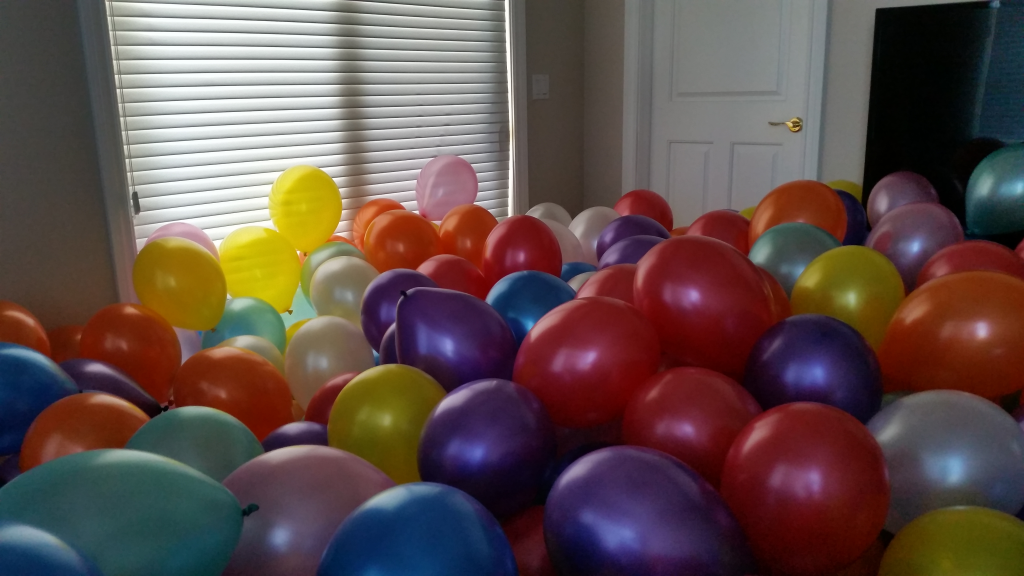 It’s a good bet that sometime in your life, you or someone you know has suggested filling a friend’s room/dorm/cubicle with balloons as a surprise for a birthday or other celebration. It’s one of those ideas that keeps coming up. But how practical is it, really? How many balloons would it take? How long would it take to blow them all up?

Well, my daughter had a birthday party and wanted a room full of balloons that she and her friends could dive into, crawl around in, and generally have fun. This was the perfect opportunity to find out what it really took make a balloon-filled room.

When my daughter and wife came home with 144 balloons, they thought it was going to be more than enough. My daughter spent about an hour blowing up some of the balloons the old-fashioned way, making a small pile between the bed and the wall. She stopped, exhausted, and had inflated about 30 balloons. A few things became very clear: blowing up all 144 balloons by mouth was going to be a huge chore (and probably isn’t entirely healthy), inflating 144 balloons this way was going to take too much time, and 144 balloons wouldn’t even cover the floor, much less fill the room.

We were going to need A LOT more balloons. 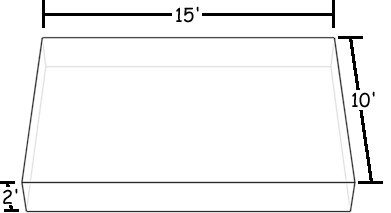 We ultimately decided the area we wanted to fill was 10 feet by 15 feet, and we wanted to reach the top of the bed, which was about 2 feet high. Keeping everything in inches, that works out to be 518,400 in3 in volume that we needed to fill.

So how many balloons would that take? Balloons, not being rectangular and all, or even the same size and shape from one to the next, are hard to calculate. So treat everything from here on as rough estimates and we’ll see how well it matched our end result.

The balloons we used are advertised as being 12″. There’s some truth to that, but not where it matters for our estimates. In reality, the shape and size of an inflated balloon is more like this: 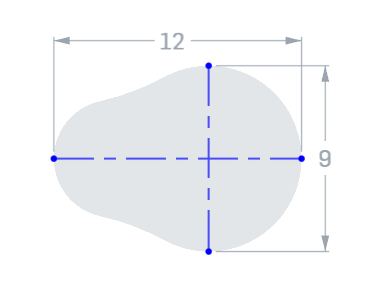 In order to avoid super complicated volume calculations, I very scientifically squished the balloon with my hands until it was more-or-less a sphere and eyeballed it to be about 9.5″ in diameter. Close enough.

The volume of a sphere is a pretty easy formula:

This gives us 4/3 x 3.14159 x 4.753 = 448.92 in3 for each balloon. But we can’t just divide the room volume by the balloon volume to get the number of required balloons, because they don’t pack tightly. We have a situation that’s more like figuring out how many spheres can fit, taking into account the air space between them. This is called sphere packing and it quickly gets into some involved math. Fortunately, the magic number we need comes from Wikipedia:

Random packing of equal spheres generally have a density around 64%.

Awesome. 10 bags of 72 balloons each should do it. Off to the store we went to get eight more bags of balloons.

Inflating all those balloons by mouth was clearly not an option. Even using one of those hand balloon pumps was going to require too much manual effort and take too long. Fortunately, we were able to use a small air compressor and a general inflator nozzle.

The final obstacle was having to tie all those balloons. The party store was no help with the idea of a clip, so we wound up just doing them all by hand. This is a little bit painful and we have chafed fingertips to prove it. Pro tip: the single biggest factor in how fast and easy it is to tie the balloon appears to be how far you can stretch the neck as you wrap it around your fingers. The longer you can stretch it, the easier it is to make the knot.

Once we got into a rhythm, the whole effort was not too daunting. Here are some simple statistics about the process:

The actual results and the math line up. There could be a lot of coincidence in that, though. It doesn’t really matter. What matters is that the balloon-filled room was a huge success at the party. 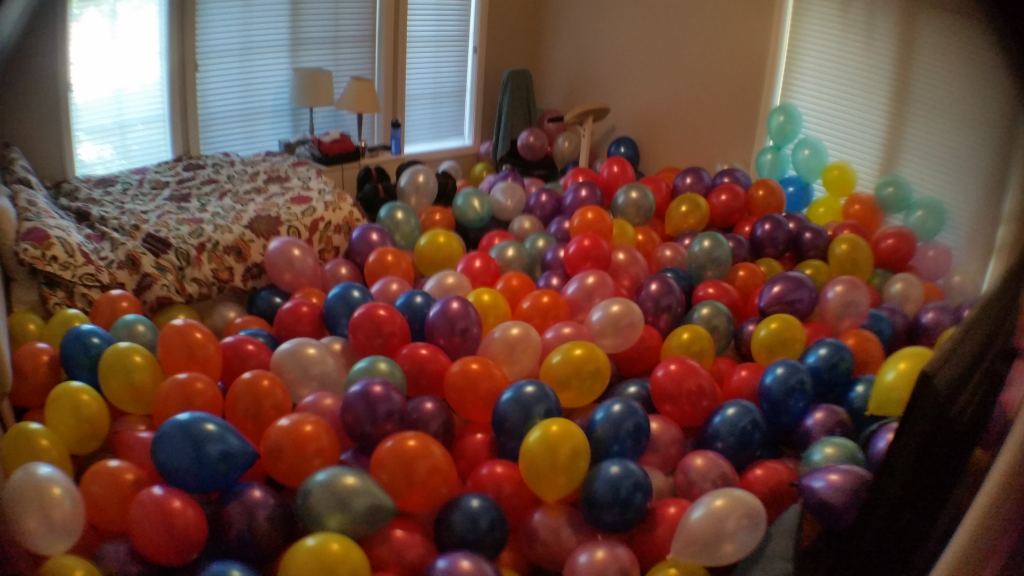 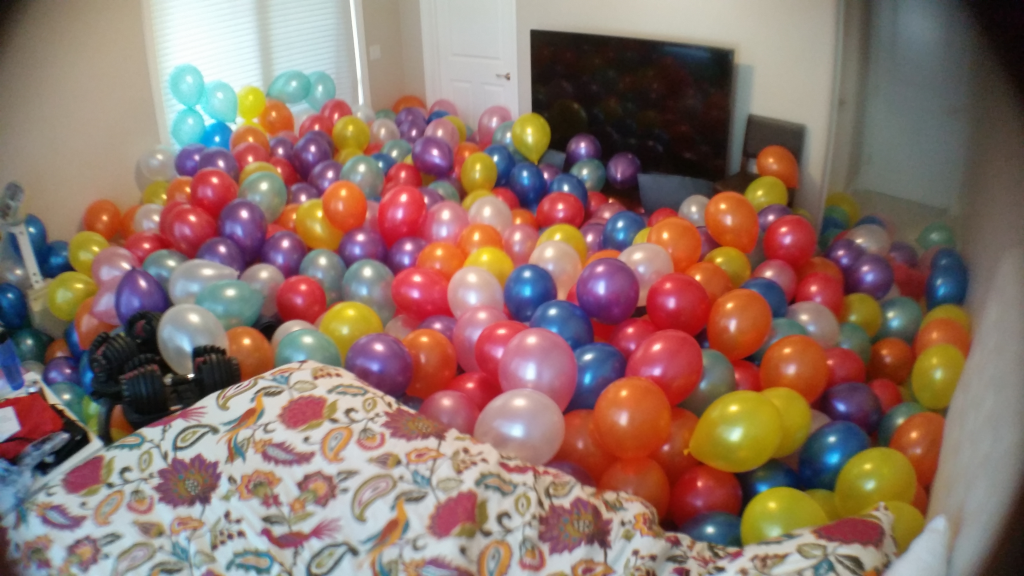 Read the next piece of this fun project: Popping and cleaning up seven hundred balloons!